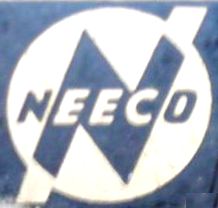 'Neeco' branded equipment was manufactured by various companies, they were distributed by National Electric & Engineering Co. Ltd. Currently there are 6 documented models.

The Neeco brandname was introduced by The National Electrical and Engineering Co. Ltd in 1918 as a house brand name for their products (mainly ranges and grills, but also jugs, toasters and other appliances).  Over time, this became the name by which the company was known - a company that had been formed in 1908 and which remained in business until they were taken over by Cable Price in 1966.

Then in mid-1940, a new line of products was announced - NEECO Radios.  This is the earliest advert found on that announcement:

Some of these later adverts mention that radio manufacturing was now being curtailed due to the war effort, and by 1943 this advert was being run:

Manufacturing resumed after the war in late 1945.