'A Musical Instrument of Quality' 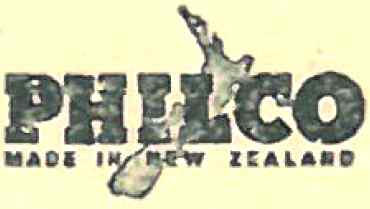 'Philco' branded equipment was manufactured by Dominion Radio and Electrical Corporation Ltd, they were distributed by Chas Begg & Co. Ltd. Currently there are 63 documented models.

Philco was one of the worlds largest radio brands.  Based in Philadelphia USA it had its start as the Helios Electric Company and produced carbon-arc lamps until 1904.  In 1906 the company reinvented itself as the Philadelphia Storage Battery Company and made, as the name suggests, batteries - initially for electric vehicles and then for radios as the industry started to grow.  A few years later they began a line of battery eliminators to run radios from household power outlets.

The Philco brand appeared in 1919, although they did not begin production of radios until 1926 - but within 4 years they were the largest manufacturer of such in the U.S..

Philco had been imported and distributed in New Zealand by Chas Begg from 1929, although import restrictions in 1937 meant that only the chassis was imported and fitted to locally manufactured cabinets.  By 1939 Dominion Radio & Electrical Corp. had been set up in Auckland to produce Philco sets for the NZ market.

The Philco Tropic range from around the WW2 era had chrome plated chassis' similar to overseas models but this costly process gave way to blue paint some time after the war ended.

Model numbers generally (with the exception of some models from the early-mid 1940's) did not follow the American style of starting with the year (eg: 41-722) and while they started off looking very much like their American cousins they slowly drifted further and further from any similarity.

Philco continued to be a leading brand in the NZ marketplace until the early 60's when, due to the parent company being sold off to Ford, the ties between the NZ manufacturers (DRECO) and Philco USA were severed, and DRECO introduced the Majestic brand to replace it.