Rola's manufacturer is currently unknown, as is the distributor. Currently there are 2 documented models.

It is not uncommon for the only brand name visible a radio set to be the label on the speaker itself - and Rola was probably the single-most common speaker brand used in New Zealand manufactured sets through to around the mid-1960's when Plessey took over the company.  And while Rola did briefly dabble in the manufacture of radios around 1930, they are very rare so chances are that if you think you have a Rola radio, what you probably have is a radio that simply uses a Rola speaker. 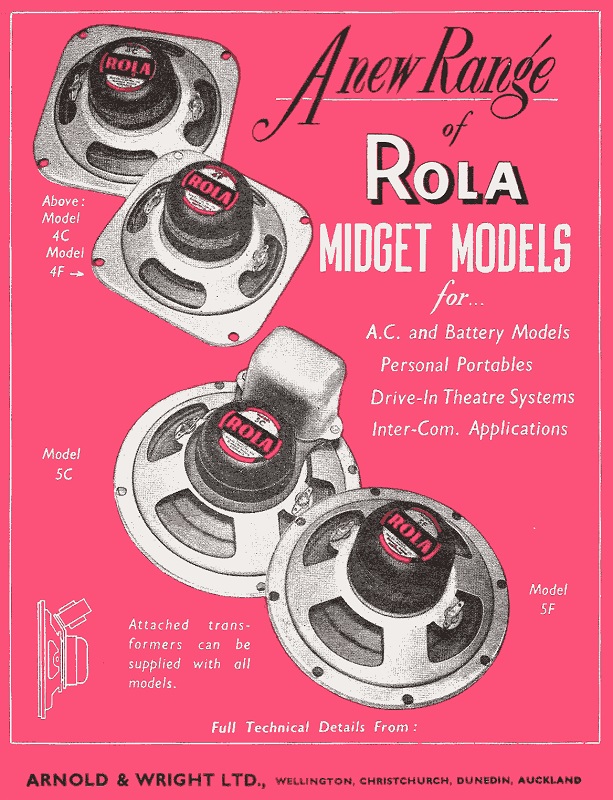 Rola started in the United States of America in 1924 to manufacture speakers for the new and blossoming radio industry.  In 1930 Rola (Australia) Ltd was formed to assemble and distribute speakers for the Australasian market, and by 1934 Rola speakers were being manufactured in the United Kingdom by British Rola, an offshoot of the parent company.  Speakers used in New Zealand manufactured radios were sourced from all of these locations, and this can cause some confusion as to the country of origin of some NZ-built radios since the speakers are such a prominent item in a radio, and Rola speakers in particular had the country of manufacture on the label.

Rola speakers were imported to New Zealand as early as 1927, with adverts of 'daily demonstrations' of the new Rola cone speaker by Superadio Ltd of Queen St Auckland.  These would have been separate stand-alone speaker cabinets as was the style of the day - radios typically being a small wooden or metal cabinet just containing the electronics. 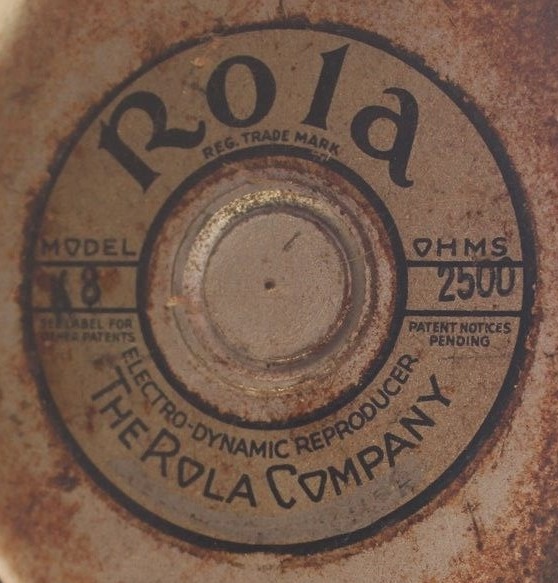 It is also possible to find Rola speakers with the country of origin painted over (note the silver paint at the bottom of the logo) - According to John Stokes' research this was a practice employed by Radio Ltd to support the 'Be British, Buy British' sentiment of the day - and so speakers sourced from the American plant would have their manufacturing location obscured.  JWS refers to this as a deceptive practice, however given that the speaker was such a prominent item in a radio, and that radios did not generally have a back panel, its almost understandable that they did this so as not to confuse potential customers as to the origin of the set.

Some Rola speakers are more commonly seen than others - for example the 5C, a 5-inch general purpose speaker that was produced in vast quantities and was found in many 1950's-60's bookshelf and mantle sets, characterised by its black dome-shaped magnet housing often with output transformer bracket pressed over.  a common transformer used with this was an LCG72 where the set used an EL82 output valve (such as the Bell Colts between the mid 1950's and into the 60's).

Rola speakers were initially imported, then manufactured or distributed under licence by Swan Electric Ltd in Wellington, but eventually a dedicated Rola New Zealand factory (Loudspeaker (NZ) Ltd) was set up to fulfill the local requirements.  Some time in the 60's Plessey merged with Rola, and eventually Plessey took over the Rola name.

The Golden Age of Radio - John W. Stokes (out of print)