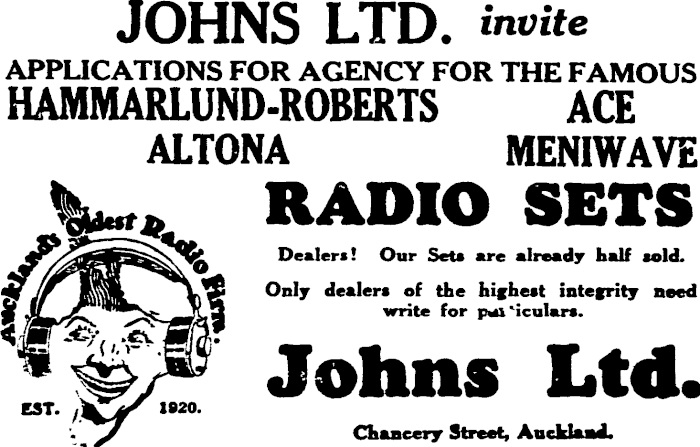 For radios made under the Johns Ltd umbrella, check their manufacturing company Wellmade Ltd.

Johns Ltd was formed as a partnership in December 1920 when two young brothers recently returned from service in WW1, Clive and Victor Johns, began importing radio components and accessories.  The actual name Johns Ltd was not registered until a few years later - a notice in the NZ Herald on the 29th of November 1924 showing the details.  The slogan "Aucklands Oldest Radio Firm" was adopted.

In 1951 the company was sold to the Swan Electric Company who continued to operate both the city and Doninion Rd (Wellmade Ltd) sites, but not for radio manufacturing.

Graham Johns, the son of Victor, following in his family footsteps, established a new business around this time selling sporting goods and radio equipment.  This business became Johns and Long in 1960 and lasted through until some time in the mid-90's.