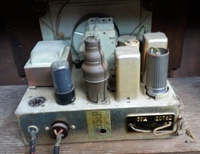 The Columbus model 56 was manufactured for Columbus Radio Centre Ltd by Radio Corporation of New Zealand Ltd in about 1941.

Appears to have been a 5-valve version of the venerable model 66 although not nearly as popular given the few examples found today.

Noted as being similar to model 52S

56 service info unavailable, but it has been noted as being very similar to the 52S - see this service documentation and notes for more info: