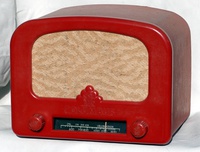 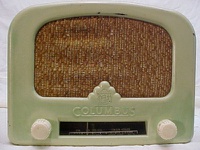 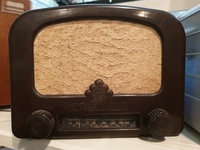 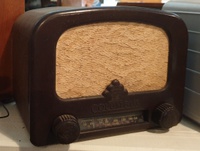 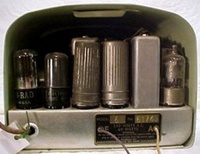 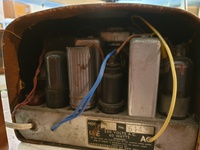 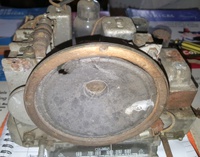 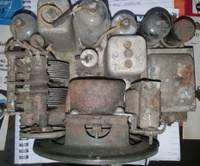 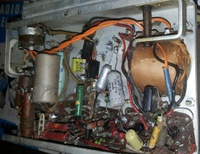 The Columbus model 6 was manufactured for Columbus Radio Centre Ltd by Radio Corporation of New Zealand Ltd in 1946.

The model 6 is a miniature broadcast-band mantle set with an experimental cabinet design.  Available in red, cream, green and brown.

It had a Bakelite front panel, a formed sheet metal cabinet and it was remarkably compact for the time.  The connection between the Bakelite and the metal gave the engineers some trouble until machine screws were added to the front panel with matching welded brackets on the steel housing to allow both to be screwed firmly together.  There was also talk of glue being used (either instead of the studs, or as a supplement), with requests to military aviation companies in the US and UK being made for glue that would bond steel and Bakelite effectively.  It should be noted that it was considered that the glue would probably not be needed once the threaded inserts and associated brackets were implemented, but it shows the lengths RNZ went to in their design process to ensure a robust product.

The authors own (broken) model 6 shows no sign of glue having been used on what remains of the front panel (although the evidence of spiders is clearly evident!). 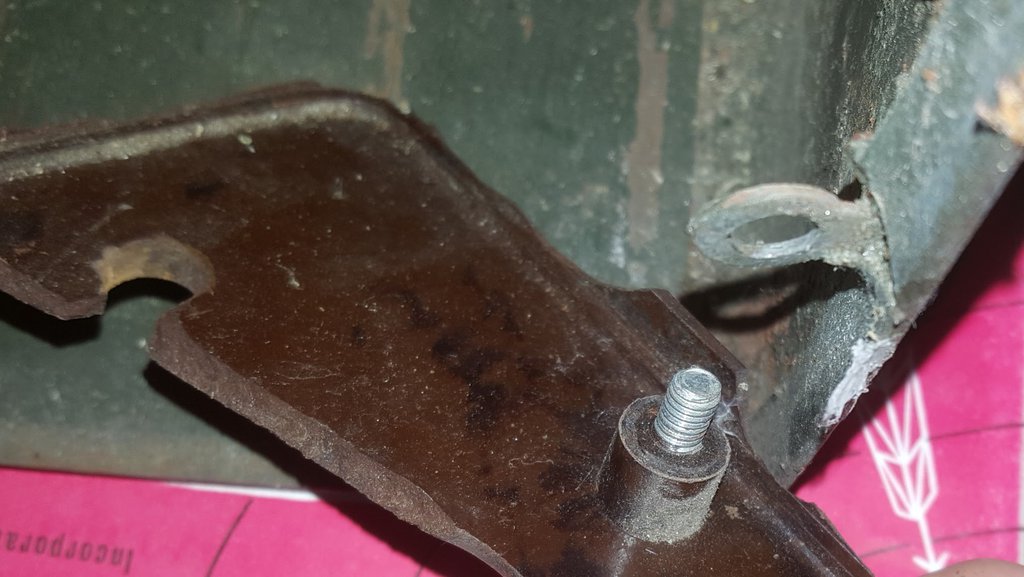 And here is a conversation between Alex Marks (the son of the company founder, and a senior manager in the company by that time) in the factory and Fred Green who was the production manager, but on a buying trip in the UK - it gives a rare glimpse into the production process and figures at the time.

21st March 1946, Fred Green to Alex Marks (Fred was in England on a buying trip) 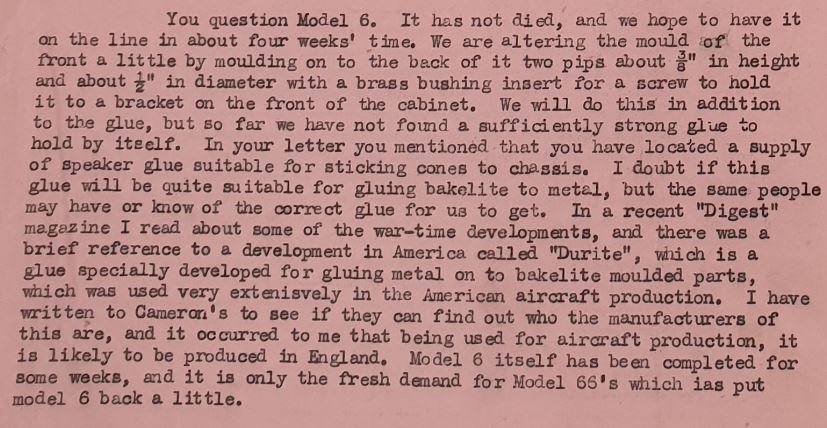 17 May 1946, Alex Marks to Fred Green on current production 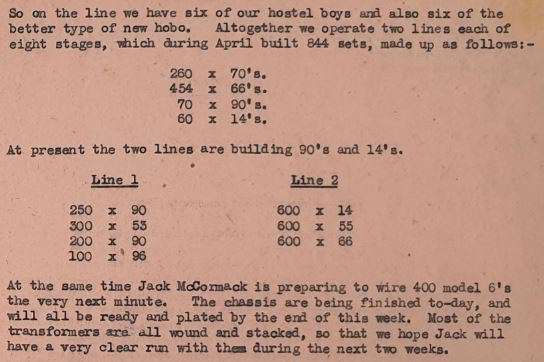 Excerpts from letters from Alex Marks (William Marks' Son) in the factory to Fred Green (who was in the UK at the time securing parts for the factory) about the upcoming first run of the model 6.  Note that in the space of 11 days they had gone from a threaded insert to a molded in screw - which is the final solution they went with.

Initially, 400 were planned, but only 200 were apparently made in that first run.  They were made on and off through 1946 and would not have been released until late that year as the company's production was slowed by staff shortages.  They were certainly released far behind other 1946 models such as the model 14's (Gainsborough and Raeburn).

Its also likely that the first dials were not etched and screen printed as was common, due to staff shortages in that department as well - there is a reference in company letters (see below) to the dials being 'painted' by a new lady (Miss Davies) in the department who reportedly did fantastic work (and based on sighted dials, the author can only agree).  These skilled staff shortages meant that only the higher-end sets were getting etched glass at this time.  The red set shown above (and probably the green) both look to have hand-painted dials, while the later model dial on the authors set (1YA is at the 1948-on frequency) appears to be at least screen printed, if not etched as well, as you can see below. 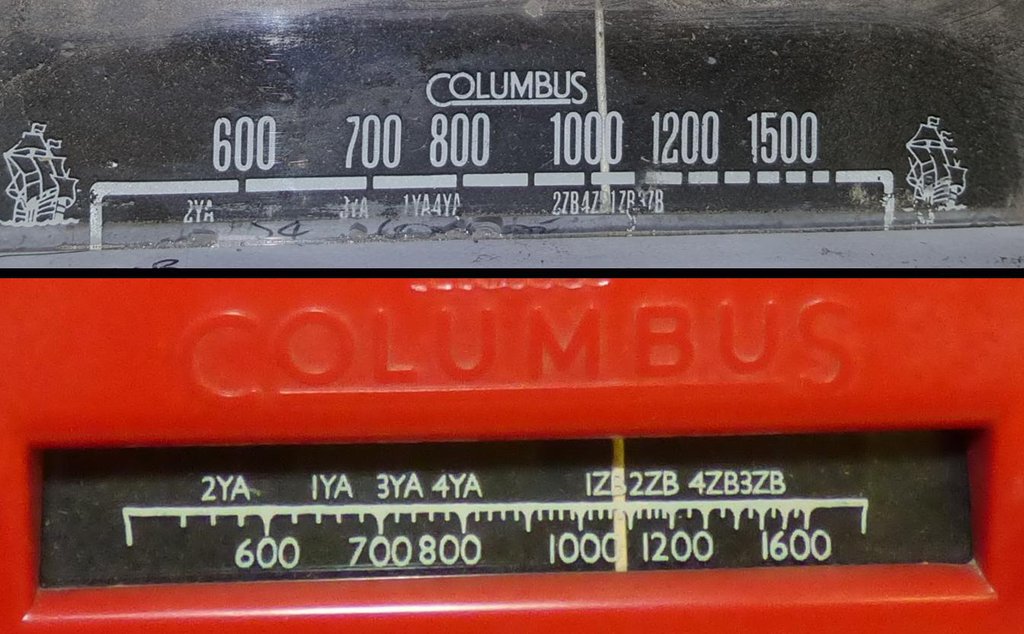 Authors dial above, red set below

All sighted serial numbers are within 400 of each other, and this set is seldom seen - which means it is unlikely many were made, or sold. 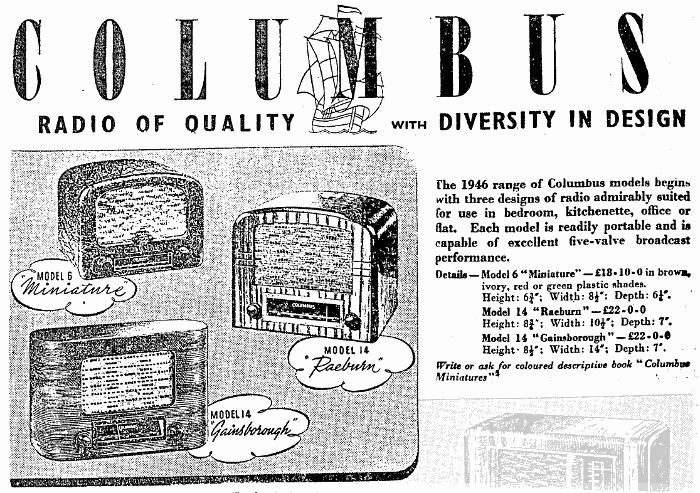 This set was also the subject of a YouTube series on re-creating the factory dial.  If you want to follow along in Inkscape to try and make your own version, the dial scan made in the first video is in the images above.

Chassis Notes(most schematics can be clicked to download a full size version) Columbus only. 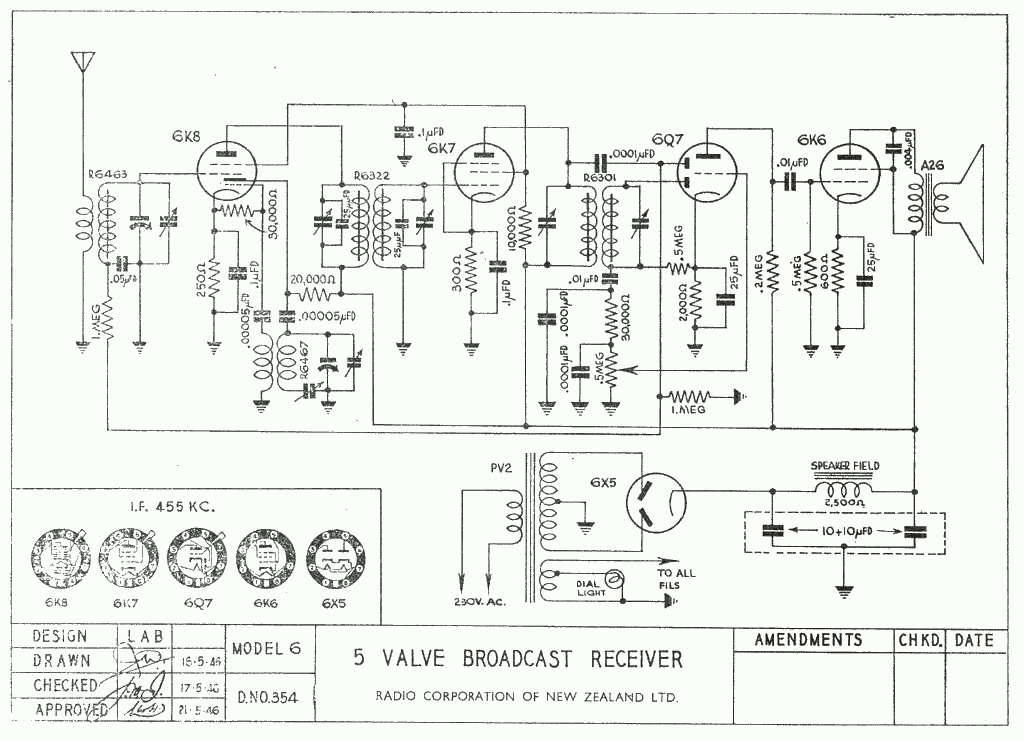