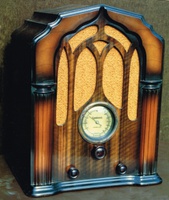 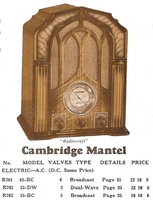 The Companion Cambridge was manufactured for Johns Ltd by Wellmade Ltd in 1936, it was in production for 2 years.

The semi-cathedral cabinet option for the 1936-37 range.

Sets available in the Cambridge cabinet, according to the Johns catalogue:

The photographed model from John Stokes' photo archive is noted as being a 6V DW model (not listed above).  Also note the knob layout is different to the catalog image - probably a different year?  The dial looks slightly smaller to accommodate the layout.