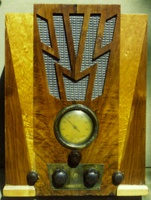 The Companion Oxford was manufactured for Johns Ltd by Wellmade Ltd in 1936, production ran for 2 years.

Companion radios were custom configured, so almost all the 1935-37 chassis' that Companion had were available in the Oxford cabinet.  The one pictured is probably the 65 All-Wave, although only a front photo is provided (from the photo archives of John Stokes).

Sets available in the Oxford cabinet, according to the 1936-37 Johns catalogue: