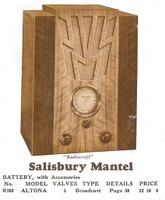 The Companion Salisbury was manufactured for Johns Ltd by Wellmade Ltd in 1936, it was in production for 2 years.

This is the entry-level cabinet for the 1935-36 period, and is only listed as being available with the basic 5-valve broadcast battery set (Altona 5).  It's similar in appearance to the Oxford cabinet, although much more basic.