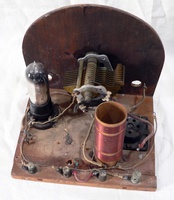 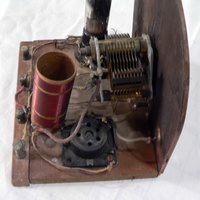 The Courier Junior was manufactured by J. Wiseman & Sons Ltd in 1928.

The owner of the photographed model above has this to say about his example - which is quite possibly the only one left:

The valve is a Cosmos SP-18 Red and is probably original; however the second valve base is an addition and the coil is not the original.  The cabinet shell is a piece of sheet metal shaped to suit and painted brown. The strip of wood tacked to the rear of the base is also an addition. I suspect that someone attempted to convert it to a Hikers Two.