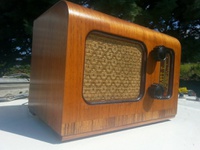 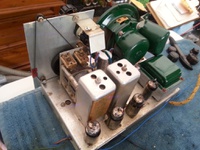 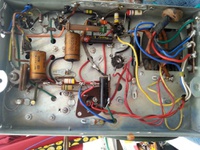 The Courtenay model 5M was manufactured for Turnbull & Jones Ltd by Radio Corporation of New Zealand Ltd in about 1951. It's part of the RCNZ Model 5 series of radios.

The model 5M was an updated version of the model 5, using all miniature valves.  The tuning arrangement was also modified to give a better spread of the cluttered upper frequencies.

The Courtenay 5M is part of the RCNZ Model 5 series of radios.

Chassis Notes(most schematics can be clicked to download a full size version) 5M used all miniature valves as opposed to a mix of miniature and GT valves used by the original model 5.  Also had a revised tuning arrangement which spread the broadcast band more linearly over the tuning range.  Used a RCNZ 5" EM speaker.  The dials are plastic and prone to fogging and cracking from UV damage.