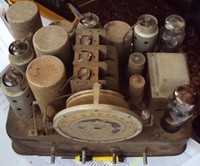 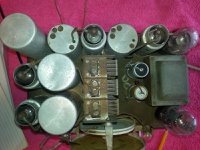 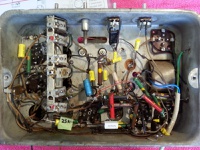 The Pacific 6 Valve Dual Wave was manufactured for Pacific Radio Co. by Radio Corporation of New Zealand Ltd in 1935.

In late 1934 the new 1935 range was released by Pacific Radio Co.  It consisted of several chassis models which were all quite similar to their Courtenay counterparts although, unlike the Courtenay, Pacific displayed no model code on the chassis making them difficult to identify.  Generally, they used a label on the inside of the cabinet describing the chassis - the most common being the 6 Valve Dual Wave (although one incorrectly printed label also refers to it as the 6 Wave Valve Dual).

There were a range of cabinet styles for the 1935 year (some, like the Raleigh were carried over from the previous year), and the models for 1935 are catalogued under those names:

It should be noted that these cabinet styles were used for all chassis types in 1935, so refer to the label or the actual chassis to determine what service info to use.