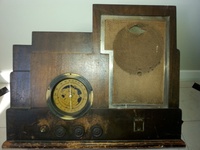 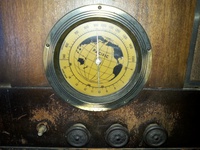 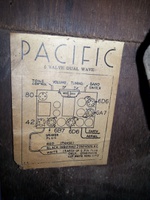 This cabinet was apparently also used on an earlier model with an arc-dial (please get in contact if you can supply photos of that model), and also on the later model 21.  The later use was most likely to use up remaining cabinet stocks.

The Raleigh typically was fitted with the 6-valve dual wave chassis developed by Radio Corporation of New Zealand for the 1935 year.  This chassis was effectively a dark-gold-painted version of that found in the Courtenay model 108.

The cabinet looks to have been (at least in all sighted original finish models) finished in three shades - dark on the bottom portion, medium on the left side, lower right side and left (lower) top portion and a lighter shade around the dial and up over the top of the speaker surround.  The speaker grill surround is chromed.

The displayed model above was found in a private museum (of sorts) in a small Central Otago town, atop an old crate and supporting a few scrap lengths of 4x2 which straddled it and an old Gulbransen model 756.  The timber atop these two radios was, in turn, holding up one end of an elaborate and vintage model train diorama.  The author had been in for a look at some other radios and almost missed it, but fortunately the owner was not that attached to it, and had another radio they could swap in to hold up the railway - and so a deal was reached to rescue it.

Upon extraction it was found to be fitted with a very badly hacked around AC-mains-modified original Pacific 7-valve battery chassis - despite the original Pacific label in the cabinet suggesting it had, at one time, been an AC mains set.  It had been very roughly converted using late model (50's) parts and given the appaling condition of the chassis and how bad the conversion had been done, one could only assume that a hacksaw and a hammer were the only tools available.

It will, in time, be returned to a fully working and restored 6-valve dual wave set. 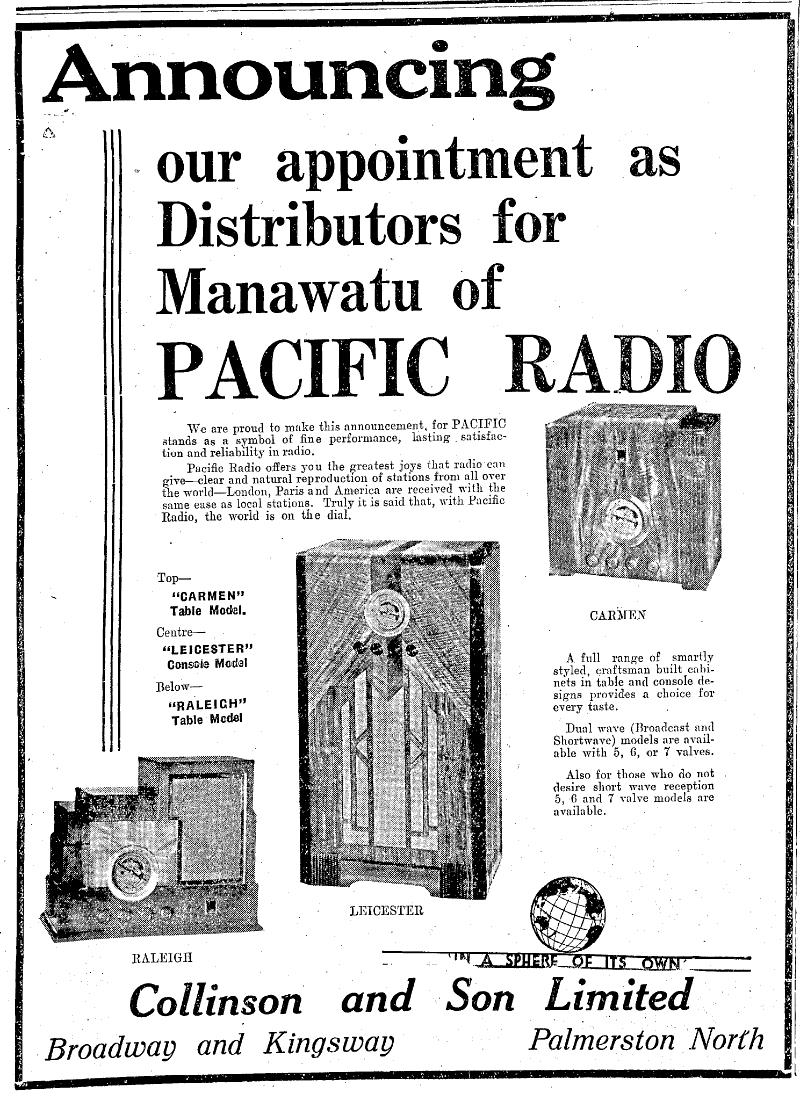 The Pacific Raleigh is part of the 1935 Pacific series of radios.

The Pacific Raleigh is also part of the Pacific Art Deco series of radios.

In 1934 and 1935 Pacific produced some truly magnificent cabinet designs.  A few of these were particularly Art Deco inspired and worthy of special mention. 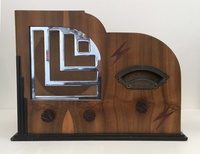