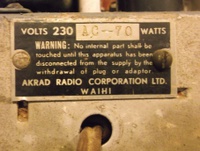 The Pacific (Post-WWII) 6PP was manufactured for G. A. Wooller & Co. Ltd by Akrad Radio Corporation Ltd in about 1951.

Probably very similar to the 7PE which is a 6-valve dual wave radio with magic eye.

Valve lineup is best-guess - based on other similar models from this year.