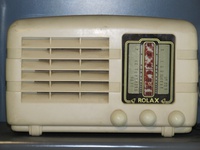 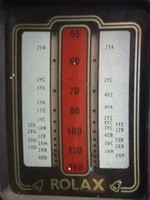 The Rolax Colt was manufactured by Bell Radio-Television Corporation Ltd in 1953, it was in production for 2 years. It's part of the Bell Colt series.

Sighted examples have been cream or brown with the original domed knobs and have early serial numbers, the photographed example here being a 1953 original Bell Colt chassis, but some have been seen with 5B4 stamped chassis'.  Effectively a Bell Colt, including the dial (except for the Rolax name in place of Bell - but interestingly even the bells either side of the name are still present).

Possibly a badge-engineering arrangement to boost sales of the new Bell model in the South Island - Bell was an Auckland based company and Rolax was a Christchurch based brand.

This arrangement seems to have been limited to a couple of years right at the start of the Bell Colt era.

The Rolax Colt is part of the 'Bell Colt' series.

Chassis Notes(most schematics can be clicked to download a full size version) David Clist noted an issue with the tone control circuit producing high harmonic distortion at the full bass position - although as most people never set the tone control here its unlikely anyone would have ever noticed. RJ Hatton notes in his 3-part series on the Colt (October 2004) that 100pF caps in this model could prove to be unreliable and cause a crackling sound (possibly a form of silver mica disease). I.F. transformers are ETA round-cans. These were on early 5B4 models as well.