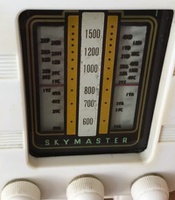 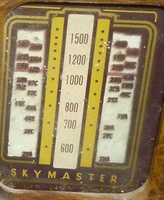 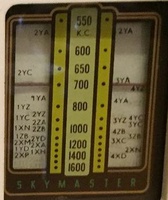 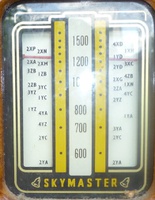 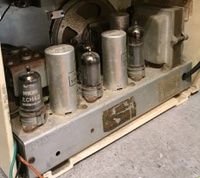 The Skymaster Colt was manufactured for Bond & Bond Ltd by Bell Radio-Television Corporation Ltd in about 1953. It's part of the Bell Colt series.

Basically a Bell Colt with The Skymaster brand name on the Colt dial glass (Bell also made a Rolax version for Sedley Wells).

It appears that this was something Bell did in the early days of the Colt, possibly to increase sales or just to improve market spread of this model.

Currently sighted Skymaster Colts appear to be early serial numbers with either an original Colt chassis or a 5B4 chassis. It is estimated that this arrangement with Skymaster only ran between 1953 and 1954, while Bell Colts ran from 1951 through until about 1980. It seems Skymaster may have then had a brief arrangement with Akrad Radio as there were some Skymaster 5M4 Junior models released.

The Skymaster Colt is part of the 'Bell Colt' series.

Chassis Notes(most schematics can be clicked to download a full size version) David Clist noted an issue with the tone control circuit producing high harmonic distortion at the full bass position - although as most people never set the tone control here its unlikely anyone would have ever noticed. RJ Hatton notes in his 3-part series on the Colt (October 2004) that 100pF caps in this model could prove to be unreliable and cause a crackling sound (possibly a form of silver mica disease). I.F. transformers are ETA round-cans. These were on early 5B4 models as well.