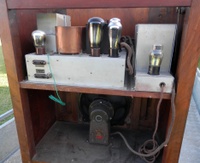 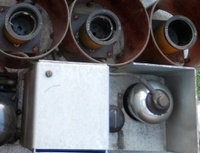 There is a 7-valve model with built in gramophone in the same cabinet but from the images available, the chassis sits lower on the front panel (presumably to leave room at the top for the turntable mechanism).

The chassis photos above are from serial number 130, taken by John Stokes of a NZVRS members set.  The chassis in the unit appears to be quite different, although also with the sets of 3 plug-in coils for changing the band - the differences are unknown at this time.

One NZVRS member recalls this very same model in the Dominion Rd Auckland shop of John Stokes, the founder of the NZVRS.