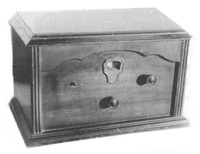 The Ultimate Short Wave Adapter was manufactured by Radio (1936) Ltd in 1932.