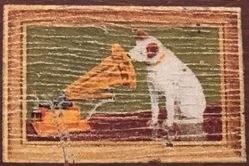 'HMV' branded equipment was manufactured by various companies, they were distributed by His Master's Voice (New Zealand) Ltd . Currently there are 48 documented models.

HMV is an international brand that reaches back into the earliest days of radio. In New Zealand the organisation was a franchise owned from 1910 by E. J. Hyams, with the primary Australasian agency being held in Sydney.

In 1926 His Masters Voice (New Zealand) Ltd was formed and gramaphones, radios and radiograms were imported, produced and even manufactured for HMV.  The principal manufacturer outside HMV themselves was Collier & Beale, and they marketed rebranded Philips and Bell models as well.

Model numbering of the New Zealand manufactured models often used a 3-digit scheme where the first 2 digits are the year of the model and the third digit is the number of valves. Letters after indicate features: BC = Broadcast, D or DW = Dual Wave, P = Portable, RG = Radiogram, TRG = Table Radiogram. After 1957 this moved to 4-digits, with the first 2 being the year, and the second two indicating the model for that year (01, 02, 03 etc depending how many models were released that year).