Background: In the early-mid 30's the rule of thumb was 4-or-less valve radios were budget local-reception-only sets. 5-valve radios were 'city' radios and typically had no RF stage (the first filtering and signal boosting stage - see below) but could receive powerful stations long distance with a decent aerial. The RF stage was typically not required for a radio in the city since the signal strength from local station(s) would be high enough to provide good reception. The next step up, 6-valve radios, had the RF stage and were great for country listeners since there was likely no local stations and the extra signal boost an RF stage provides was a necessity. Higher valve counts were available of course, but it depends where these extra valves were employed as to the benefit they provided (if any). Sometimes valves would be added simply to increase the count for marketing reasons.

But the advent of the magic eye valve in the mid 30's to assist in tuning meant that an extra valve could be added to sets that provided no improvement to the radio circuitry at all, and 6-valve sets that were really just 5-valve sets with a magic eye valve became common. This in turn meant that the buying public could not just rely on the valve count to know if a particular radio was suitable for their particular needs. 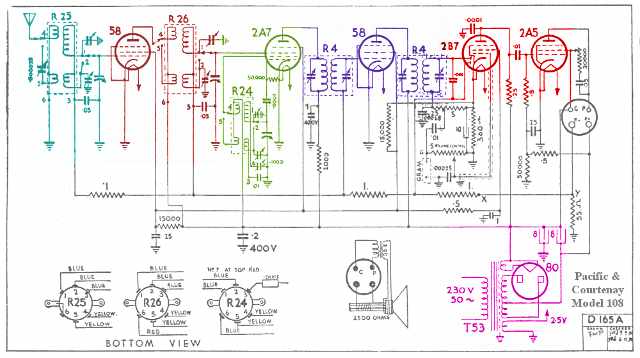 Brief overview of a 6-valve superhet radio without magic eye


In the above typical 6-valve circuit from a 1935 NZ radio the blue section tuned the aerial to provide peak signal to the radio, this signal was then fed into the brown section, the RF stage, in order to boost (using the 58 valve) and further refine that signal, which then passes in to the 2A7 in the oscillator / mixer section (the heart of the superhet design) in green. From there the mixed signal passes through the IF section (purple) which is the filtering part of the superhet design using another 58 valve. Then the signal is filtered for audio (1/2 of the 2B7) and amplified through 2 valves (the other half of the 2B7 and 2A5) to a level that can be heard through the speaker. The entire circuit is powered from the pink power supply section at the bottom consisting of a transformer and the 80 rectifier valve. 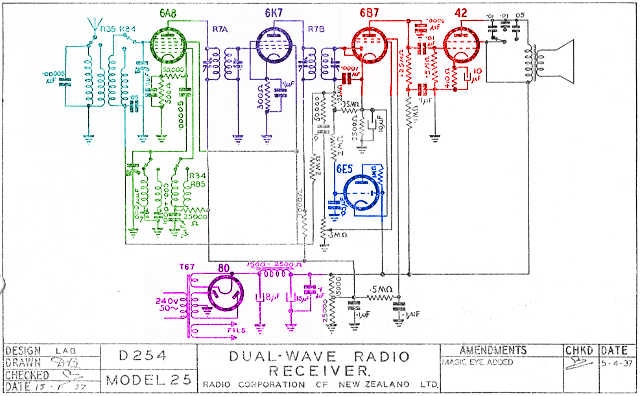 Brief overview of a 6-valve superhet radio with magic eye


You can see in this schematic from 1937 that there are still 6 valves, however there is no (brown) RF stage - but a blue 6U5 stage off to the side, which is the magic eye and related circuitry. This stage does nothing more than give a visual representation of the received signal strength, and so while 6 valves, this set has far less ability to pull in distant or weak stations.

Some sources (typically the manufacturers service and sales literature) will note a radio with a magic eye as being (for example, the Columbus model 90) a 7-valve radio while typically the NZVRS and NZ collectors & restorers have adopted Johns style and list them as 6+ or 6-valve with magic eye tuning. Using this style isolates the magic eye from the overall valve count due to it providing absolutely no benefit to the sensitivity or selectivity of the radio. Magic eye valves are simply a visual guide for tuning the radio and were optional on some models, confusing the valve count of a particular model even further.

From a marketing perspective it made sense for manufacturers to include the magic eye in the overall valve count because to the average buyer more valves meant a better radio.

To further complicate this some sets like the 1937 model 38 by Radio Corporation of NZ were listed as a 6-valve set despite having a magic eye which technically meant it had 7 valves. Furthermore once silicon diodes were introduced to replace the rectifier in the late 50's, which technically reduced the valve count by one without reducing the circuits effectiveness, different manufacturers chose whether to either count this as a 'valve' or not - for example the Ultimate model REU did, while the Pacemaker 5155AB flip-front did not. Still other sets like the Philips Concorde used two rectifier valves further confusing the count. And battery sets, which didn't need a rectifier, had one less valve while maintaining the effectiveness of a set with one more.

Still further confusing the laymans understanding of valve counts were valves that contained more than one active 'valve' - such as the ECL82 which had a triode and a pentode in the same glass envelope, thus a 5-valve radio in the 60's might have been equivalent to a 7, 8 or 9 valve (or more) from a few years earlier. Advertising would often point this out, for example the specification section of the advertising flyer for the Ultimate Monterey.

* 'equivalent' is not strictly true, since a well designed 5V set could out-perform a poorly designed 6V - but the laymans rule of thumb was more valves = better reception / quality.

ARTS&P labels - what do they mean?

The licencing of patents relating to radio manufacture prior to 1934 was not particularly well managed in Australia and New Zealand, and licence fees here in NZ (such as they were) were paid by the government at the rate of 3 shillings from each radio licence fee.

In early 1934 the Australian Radio Technical Services & Patents Co. Ltd (ARTS&P) was formed by the patent holders, issuing a single manufacturing licence and allowing applicants on both sides of 'the ditch' to use any patents. ARTS&P also provided technical assistance to manufacturers so they could make the best use of the patented technology they were paying for.

The licencing system was introduced on July 1, 1934 and was, at first, not well understood. An article in the ODT in the 28th of June 1934 explained that owners of radio patents receiving payment for their technology when a radio set was sold was similar to an author being paid royalties for the sale their book.

The licence was on the basis of 3 shillings and sixpence per cathode electron stream in the set (not the number of valves, although often the two were the same) and this number is found in the top left corner of the label.

In the first year (1934) labels in NZ were printed on white paper and stuck on (while Australian 1934 labels were plastic and riveted to the chassis).

From 1935 until 1946 the labels were all pale blue, although the year can generally be approximated by the letter prefix on the labels serial number (which did not bear any resemblence to the radio serial number). From 1946 the licence labels changed color a few times, and this allows modern collectors and enthusiasts to at least ball-park age their sets if no other identifiers are available. While this system was used in Australia and New Zealand, there were some subtle differences between the two countries - most notable the wording, which either refers to the Commonwealth of Australia or the Dominion of New Zealand

The final label issued was blue and smaller than the previous labels (most likely because sets were becoming smaller, and real estate on a chassis was getting harder to find), but the use of this licensing system died out in the 60's and its common to find no trace of a label ever having been fitted to radios from the mid-50's on.

Note, the dates above are not hard and fast. Particularly with the dark green and orange labels which often appear to have an overlap of several years - some green labels being seen as late as 1952, by which time the new small blue labels had begun to appear. Also, a lot of sets just post war do not seem to have labels at all - this could simply be because production of domestic radios had shut down for several years to focus on the war effort and they weren't immediately available. By 1946/47 labels were in regular use again.

Information was gathered from various sources to produce this list including scanning of hundreds of radios for dates and labels:
http://www.tuberadio.com/robinson/museum/Radiola_5/ARTS&P.html
http://www.radiomuseum.org/forum/artsp_australian_new_zealand_licensing_system.html
More Golden Age of Radio - John W. Stokes
The Otago Daily Times, 28 June 1934