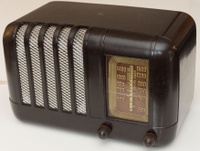 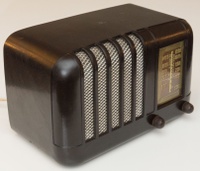 The Ariel 5VBC-49 was manufactured for Warwick Smeeton Ltd by Imperial Radio Manufacturing Co. Ltd in about 1949.

Date is based on the dial style, which is very similar to that of the Philco model 201 from 1949.

One variation shown (from the JWS photo archive) has a different dial and knobs - possibly later - 1950?