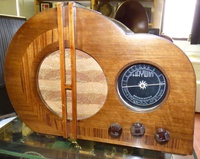 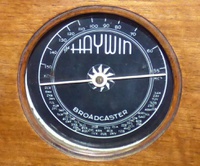 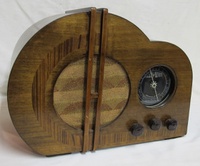 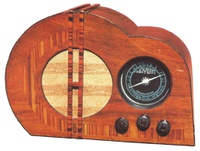 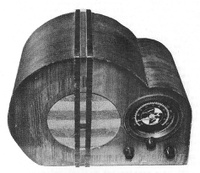 The Haywin Broadcaster was manufactured for Hays Ltd (Chch) by Radio Warehouse Ltd in about 1940, it was in production for about 2 years.

Note the dial on early Broadcasters is the same as that commonly used in Austin sets, and the chassis paint colour as well as the date stamping inside the chassis are identifying features of Radio Warehouse sets.

John Stokes did some research on this striking model and found a mere 8 sets in collections in NZ.  The date codes in the chassis show they were likely produced between 1940 and '41 (although they probably sold up until the war production rules kicked in, stopping domestic radio production until late 1945).

Dates and serial numbers found include:

This shows a range of just 51 radios in about 8 months, and this might have also included other models such as the small 4-valve set that they made at the same time.

Chassis Notes(most schematics can be clicked to download a full size version) Date appears to be rubber stamped in the underside of the chassis, serial number stamped into the metal on the back

General Construction Notes for Radio Warehouse Ltd: Often chassis will be painted an olive green colour, and the manufacturing date can be found rubber-stamped inside the chassis itself.