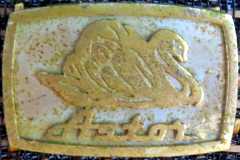 Pye Electronics Ltd (U.K.) was introduced as a partner to Akrad Radio Corp. when they reached out to secure overseas research and development in around 1949/50.  This lead to Pye (N.Z.) Ltd being established in 1951 with G. A . Wooler appointed Managing Director.  Pye quickly gained a substantial shareholding in Akrad and invested a large sum of money to upgrade the Waihi factory.

The first NZ made Pye radios appeared in 1953. To begin with, NZ Pye radios were very similar to English Pye models (notably absent in the Kiwi models was the long-wave band which is not used here) however before long Pye New Zealand was designing and building distinct models, some of which they claimed were used by other Pye companies around the world. In 1955 Pye absorbed G. A. Wooler & Co. Ltd (which was set up in 1946 to distribute Akrad products) and Green and Cooper (The NZ agents for Pye VHF radio telephones). Around this time Pye obtained a majority shareholding in Akrad, absorbing them into its organisational structure but maintaining the company as its principal manufacturing unit.

Pye began demonstrating TV in closed-circuit setups in the mid 50's, and even though TV broadcasting in New Zealand did not begin until the early 60's they were building and marketing their first production sets in 1959 with the first colour sets in the early 70's.

Philips of Holland began to take over Pye UK in 1967 by gaining a controlling interest and took full control in 1977 - a move which gave Philips NZ control over Pye N.Z. Ltd and, by association, Akrad Radio Corporation Ltd. This was the beginning of the end, and despite assurances from Philips that they were not going to close Waihi, the financial realities were that Pye (and Akrad) was gone by the mid 80's - another victim of cheap foreign imports..