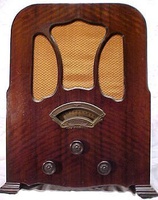 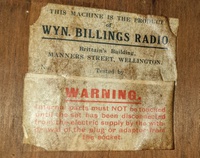 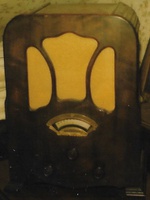 The Bellbird 1934 BC was manufactured by The Billings Radio Construction Co. Ltd in about 1934.

This is the only Bellbird radio sighted so far that wasn't either made by Wyn Billings or the Billings Radio Construction Company.

Photo is from JWS archives - an old polaroid showing this sitting beside a Troubadour 6V which looks very similar - possibly the same chassis?

The original model appears to have been made for them by W. Marks / Radio Corp NZ in 1932/33 and is probably quite similar to typical Radio Corp models of that era, then production was briefly located at Wyn. Billings Radio in Manners St... but after that, all radios seem to have been made in Cornhill St.