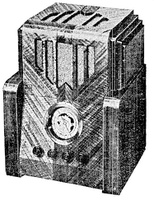 The Pacific Nottingham was manufactured for Pacific Radio Co. by Radio Corporation of New Zealand Ltd in 1935. It's part of the 1935 Pacific series of radios.