WHAT RADIO DO I HAVE?

What radio do I have?  And when was it made?.. and what is it worth?

Skip to the date section, or the price section.

Various manufacturers had different ways to show a model code, if at all - and sometimes it takes a little sleuth work and/or trial and error in order to find the code, if it even exists.  In rare cases, like the Mullard model 531 (A Philips brand) from 1939, its written right on the dial glass - but this is definitely the exception rather than the rule, and only a small handful of Philips or Mullard sets in this era actually did this.  Sheffield was another manufacturer who did this on a (very) few of their sets. 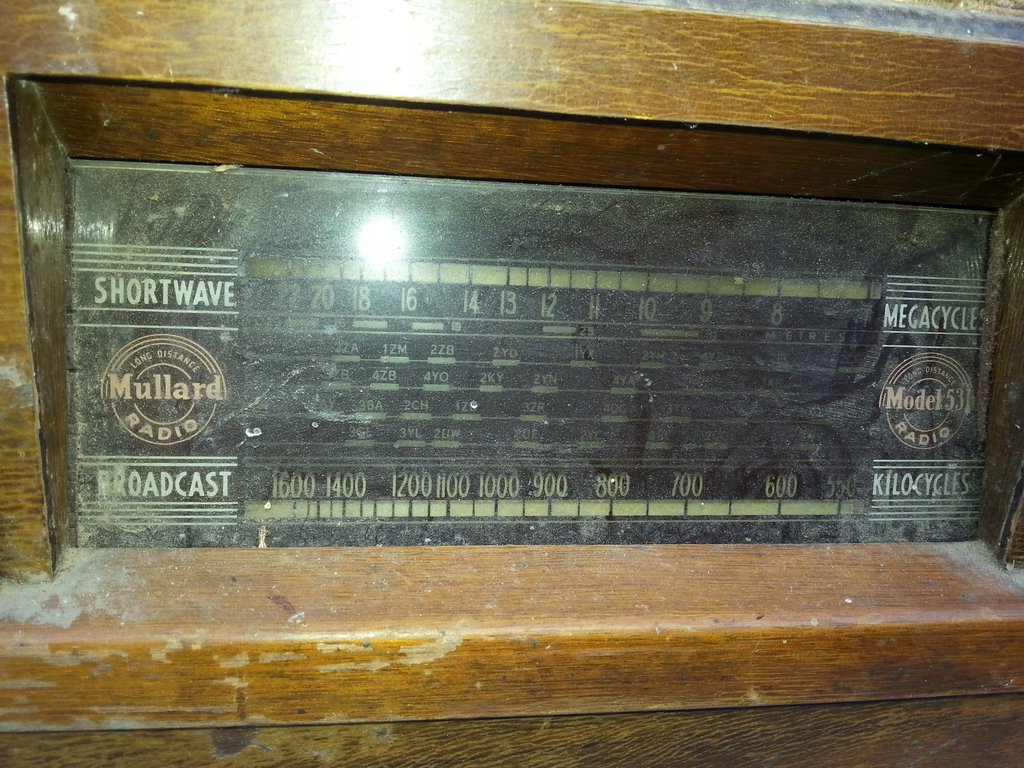 If you're lucky, you'll have the model or type number on a tag on the back of the chassis (the metal thing with the electronics fitted to it), like this:

And this generally tells you two or three useful things (3 in this case).  (1) The radio is a model 14A, (2) Its by Radio Corporation of New Zealand, and (3) because its by Radio Corp, the first digit of the serial number is also its year of manufacture (although not the decade) - 1945 in this case - although this was a feature of serial numbers only found on Radio Corp sets and won't work for any other NZ manufacturers - there are other ways to date sets, and I'll write that up separately, but as a rule you should start with the ARTS&P label letter and check the tech page for that letters year or range of years.

Many other manufacturers also had a tag with the model code, Philco for example: 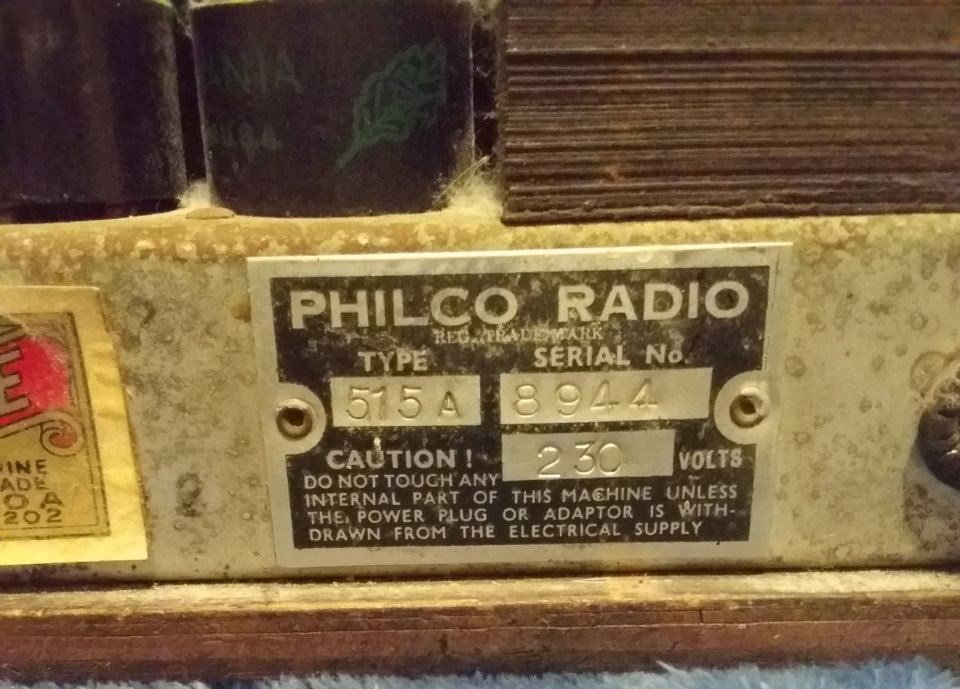 As mentioned, the serial number is not useful here in the way Radio Corp serials are, but at least it shows the model number, so that service information can be found.  Its worth stating again - even though in this case the 515A code is used on the site, you should try searching just with 515 because the suffix is not always used, particularly where there were a large number of suffixes for the same main model.

Radio (1936) Ltd (who started in 1922 as Radio Ltd, reorganised in 1936 as Radio (1936) Ltd* and then became Ultimate-Ekco (N.Z.) Co. Ltd), predominantly used 2 or 3 letter codes to show the model - and these could be found at the start of the serial number even though some models didn't actually show the manufacturer name of Radio Ltd on the tag - in this case you need to try and look up your brand name to find out who manufactured it - or just recognise that the serial number starts with 2 or 3 letters and go from there: 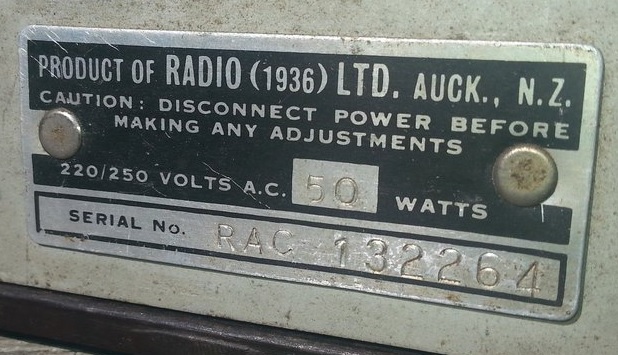 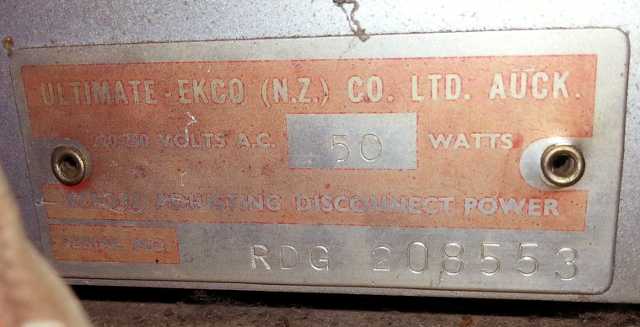 *Note, the presence of 1936 in the company name of Radio Ltd often confuses people into thinking that their radio was made in 1936 - this is almost certainly never the case, as the style of tag used by Radio (1936) Ltd in 1936 didn't have their name on it at all - as you can see here on this 1936 model tag: 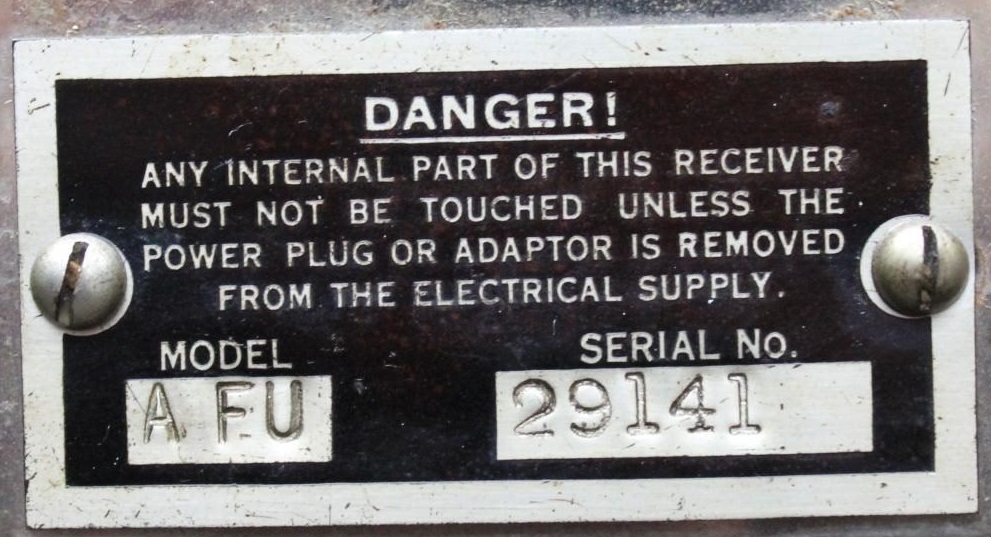 Other manufacturers would stamp the model code into the chassis - Westco typically stamped it at the start of the serial number (or sometimes on the top of the chassis somewhere).  Here is a Westco model 127 chassis: 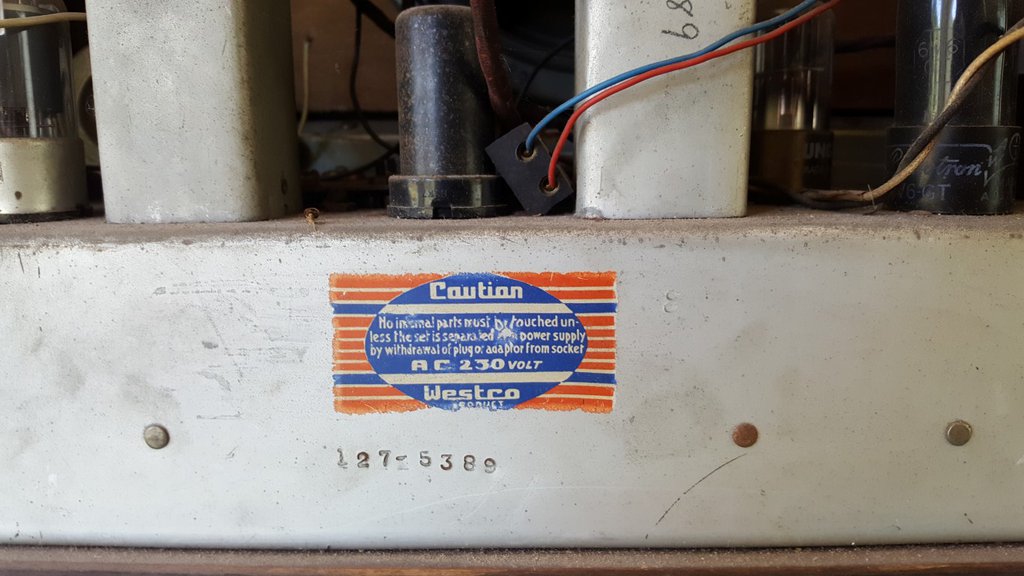 Pye were good AND bad - they typically put their model codes on a blue metal tag in the back - but then either partly or completely obscured it with a backing material that sometimes had a hole punched to show only the serial number - so you may need to remove the back to see and read the tag. 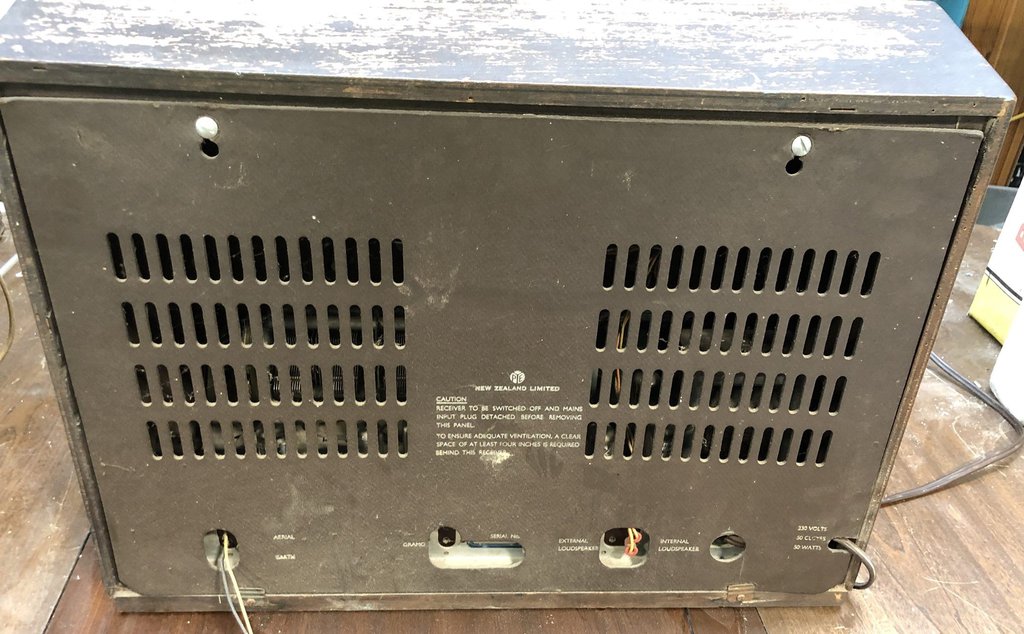 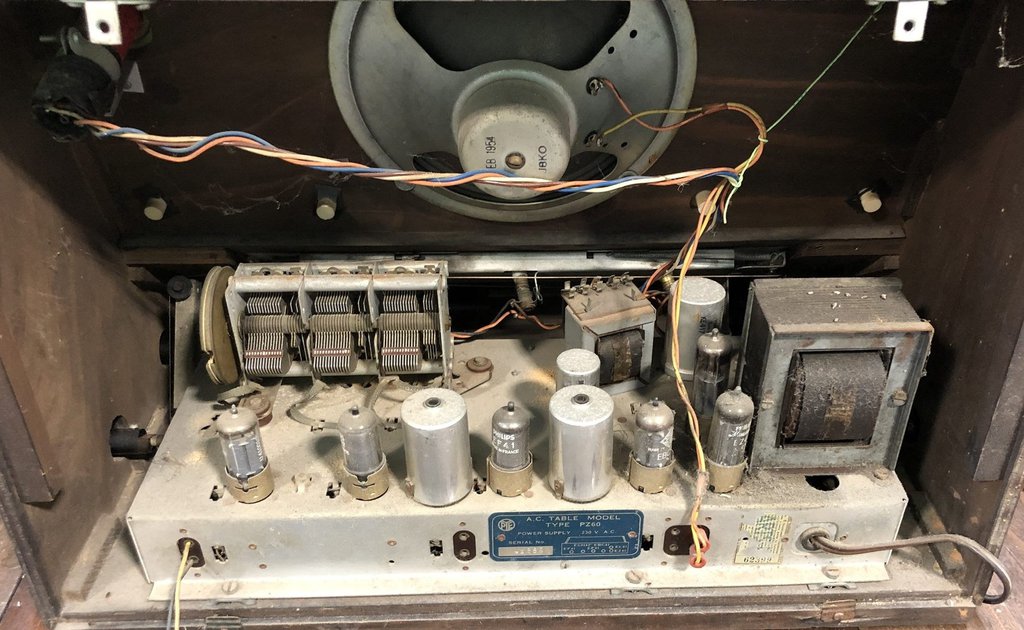 How old is my radio?

There are a number of ways to roughly date a radio made in New Zealand.

The most helpful way of dating a radio is to look at its ARTS&P label - if it has one (or if it hasn't been damaged or lost in time). On the Tech page there is a breakdown of the date ranges for each label version that was released. 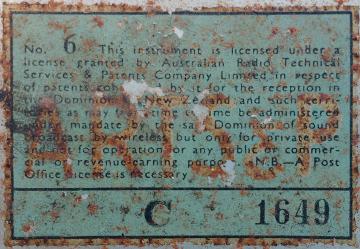 If it was made by Radio Corporation of New Zealand then the first digit of the serial number will typically tell you the year (but not the decade) that the set was made.  The decade requires a bit more sleuthing on the valve lineup, dial type etc. All Radio Corp. brands EXCEPT Columbus and Courtenay were manufactured by Radio Corp between 1930 and 1937 (and mostly between 1933 and 1937) - after that ONLY Columbus and Courtenay were produced.

The dial itself can help identify the era.  If there is no dial, just knobs, then its likely 1920's - these sets disappeared from the landscape by about 1930 as the designs became more elaborate and more user-friendly.

From around 1930 until 1932/33 it was common to see a peephole dial, where either a scale between 0-100, a display of the frequncy in meters, or the actual frequency in kHz would be shown, as with this Courtenay model 140: 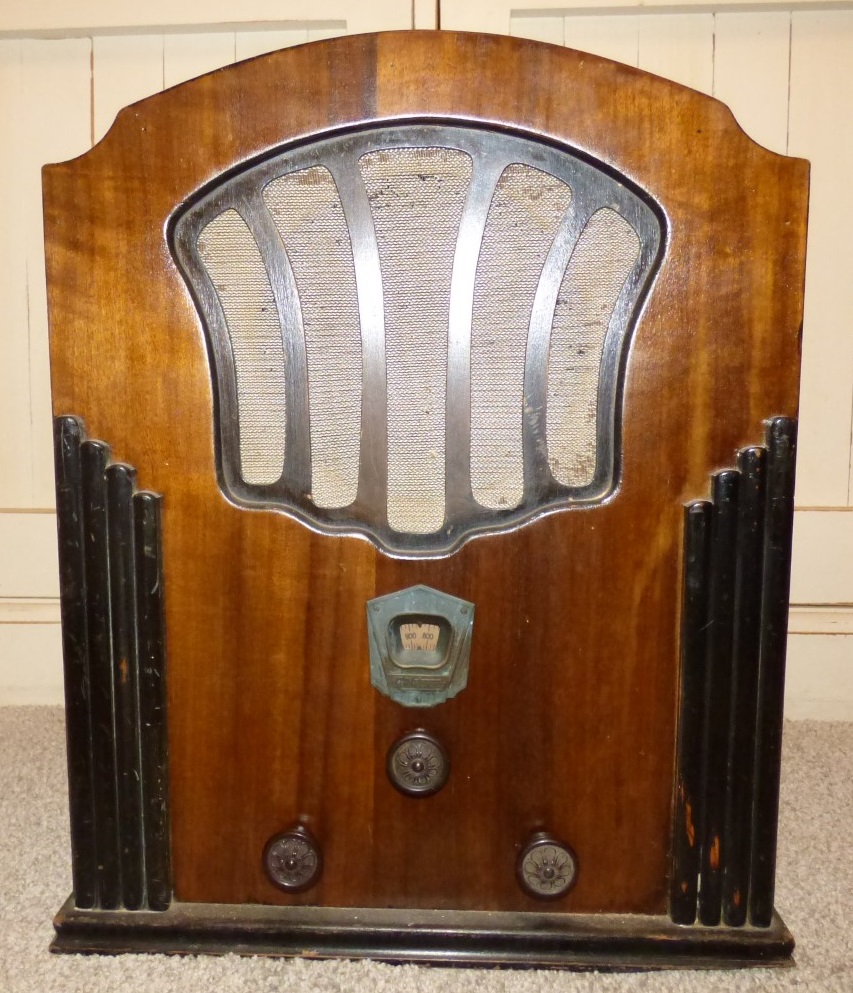 Then came the arc dial (or 'full vision' dial), which began appearing around 1932 - as can be seen on this Ultimate model 524: 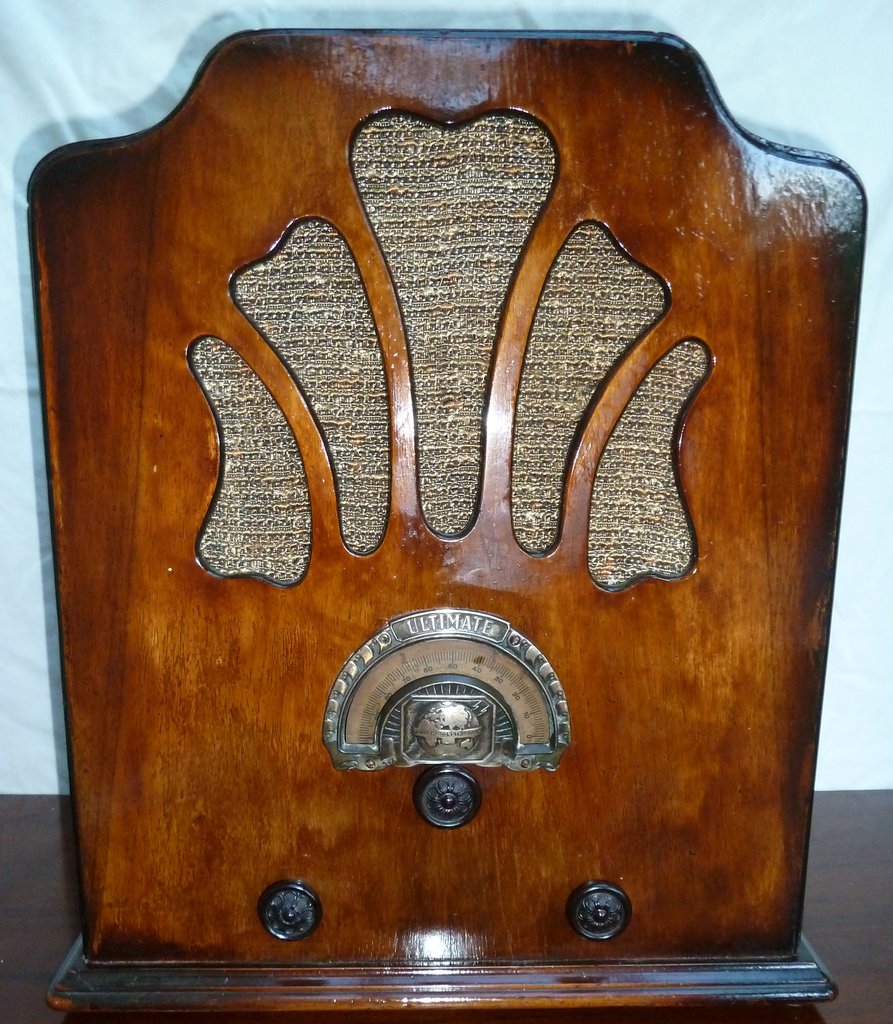 The big revolution in dial designs began appearing in 1934 - the round 'Aero' dial.  This design with its typically circular pattern and rotating double-ended pointer was seen in various outer shapes (round, triangular, oval, hexagonal, squared etc).

The large round aero dial would cement its place in the hearts of radio lovers everywhere.  Even though they only lasted 4-5 years these are the dial designs that tend to capture the imagination and represent the true golden age of radio for so many. 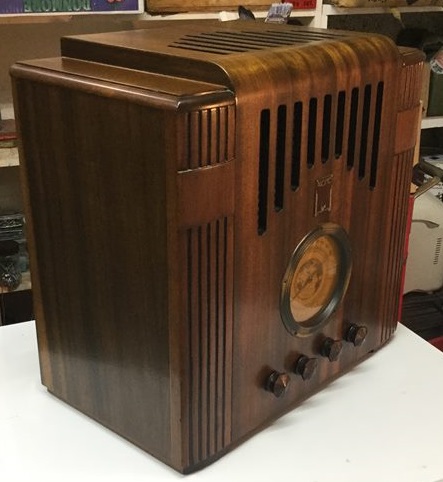 These dials can be further broken down - they tended to start in 1934/35 with a (typically, but not exclusively) yellow celluloid material as shown above and got bigger and more colourful as the era went on with 1938/39 dials typically being large and round or oval. 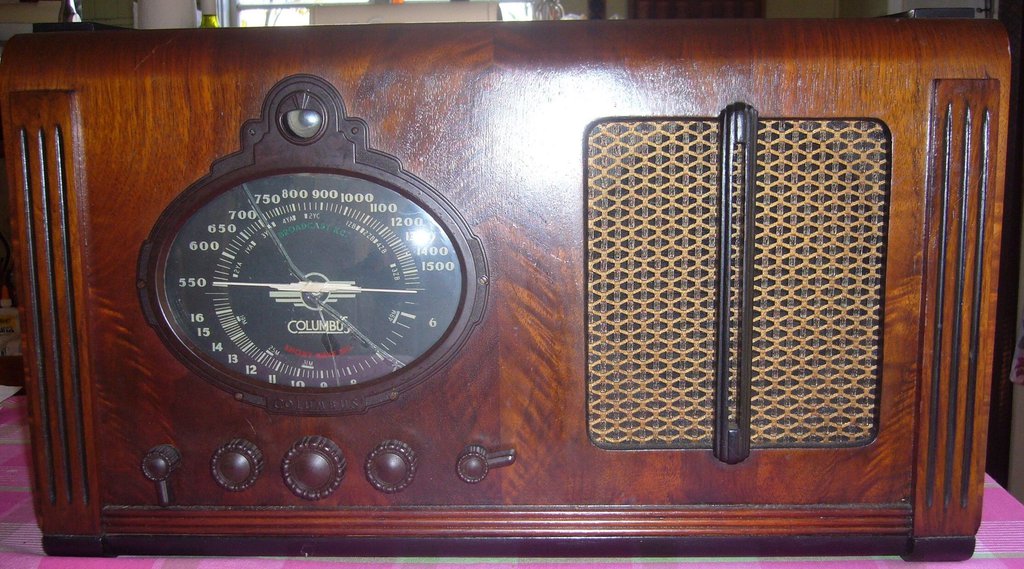 By 1939 a new 'Slide Rule' style was taking over, and with a few 'retro' exceptions like the Pacemaker model 5153 from 1953, this became the style most radios used until modern times.  Variations and improvements, such as vertical vs horizontal scales were common, and the handy innovation of 'spin tuning' with a large circular lead weight on the shaft meaning you could flick the knob around and have it travel almost the whole dial by itself was almost revolutionary - but the actual design didn't change all that much from around 1940 onwards, making later model sets a little more difficult to pinpoint an age for. 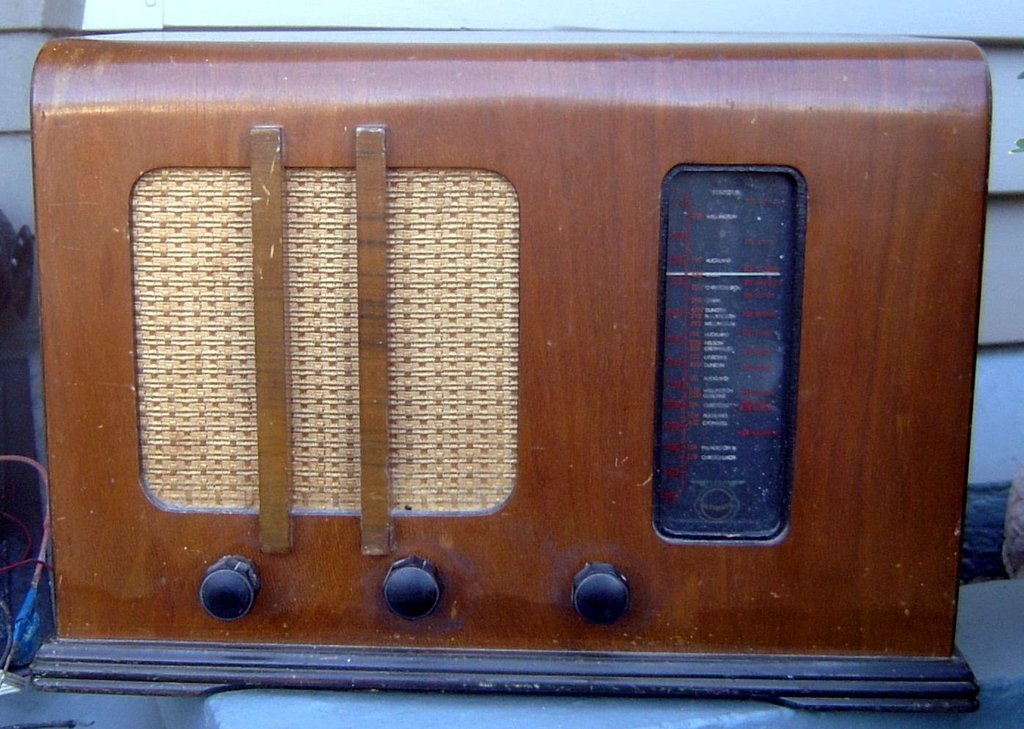 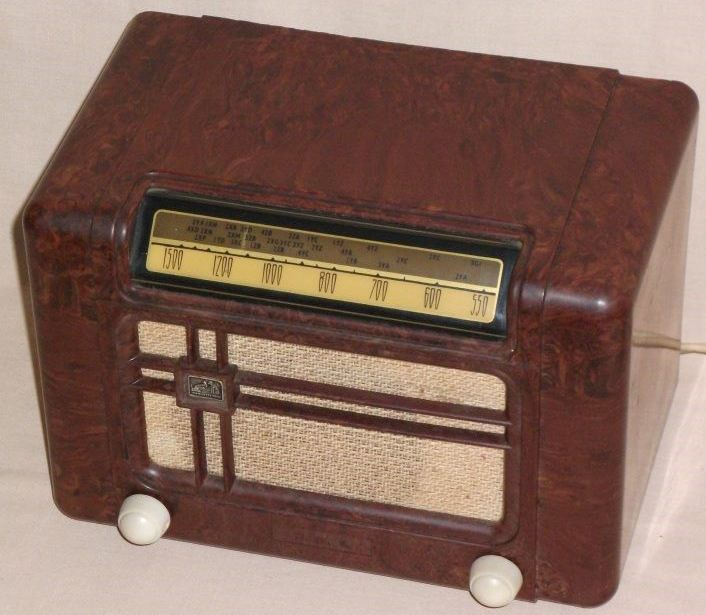 Another useful dating technique can be the code on the speakers rim, if its a Rola speaker. Rola used a code in New Zealand and Australia that is number-letter-number or number-number-letter-number (sometimes there was a second code, but it won't fit this pattern and can be ignored). The first digit or 2 digits are thought to be the code of the assembler who put the speaker together, the letter relates to the month of manufacture (A=Jan, B=Feb etc) and the last digit is the year. The decade can be determined by looking at other features of the speaker and radio. Be warned though, speakers are easily damaged, and often replaced - so this is not always a hard and fast way of dating a set. 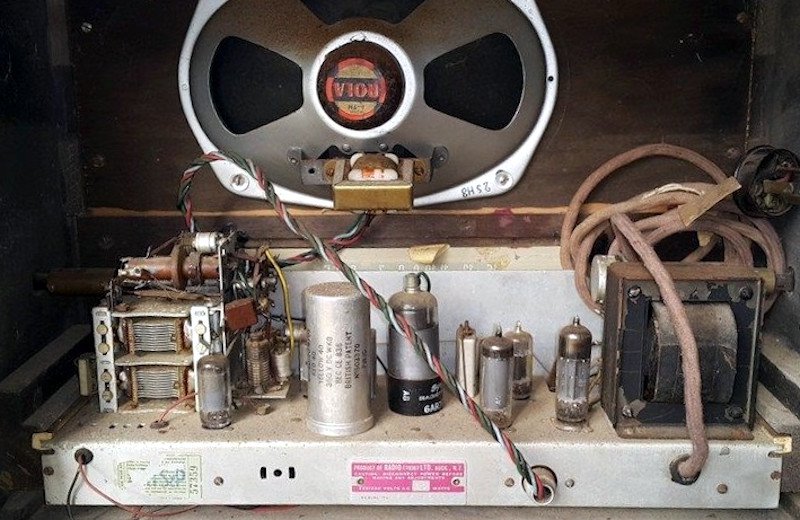 This speaker, from a Skyscraper model RBY has the code 25H3 in the bottom right corner of the rim - so assembler 25, August, 1953 (or '43 or '63). We can discount 1963, because transistors and coloured plastic cabinets were the order of the day by the 60's, and in 1943 all factories in NZ were doing war work - so its not likely from then. A closer look at the rest of the radio shows mostly miniature valves, which began to appear in NZ in the early 50's so this also counts out 1943. And we have a small blue ARTS&P label showing it was likely 1950's - those labels were gone by the 60's. So its probable that this radio was manufactured in 1953 (and in fact, it was).

Sometimes a date can be found on the can of the power supply smoothing capacitor, typically an aluminium can mounted on the chassis - as can be seen in the photo above, just above the left hand end of the red metal tag. The date code isn't common, but its worth looking for. Sometimes it will be a month and year, or sometimes a 4-digit code with the first two digits being the week of the year it was made and the second two digits being the year.

The types of valves used in a set can also help ballpark the age of the radio - and because other factors already help pinpoint prewar sets to within a few years we'll concentrate on post-WW2. The first thing to look for is the size of the valves - there are three main sizes you'll likely find, large (often with shouldered glass envelopes) which started disappearing around WW2, medium-sized glass with metal bases which can be two types, if the metal base has a dimple somewhere on the rim and/or a code starting with 7 its probably a 'loctal' type - otherwise its a GT or GT/G octal type - both were in use in NZ from WW2 until around 1952. You might also see black medium-sized metal valves - which actually date back to the early 30's but were in use right through until WW2, and even afterwards thanks to war surplus stocks being sold off when hostilities ceased. After that came the miniature types which were used from the early 1950's until the end of the valve era.

How much is my radio worth?

This is easily summed up in a quote from a wise man:

"It's easy to make a small fortune from vintage radios, but first you need to start with a large fortune."